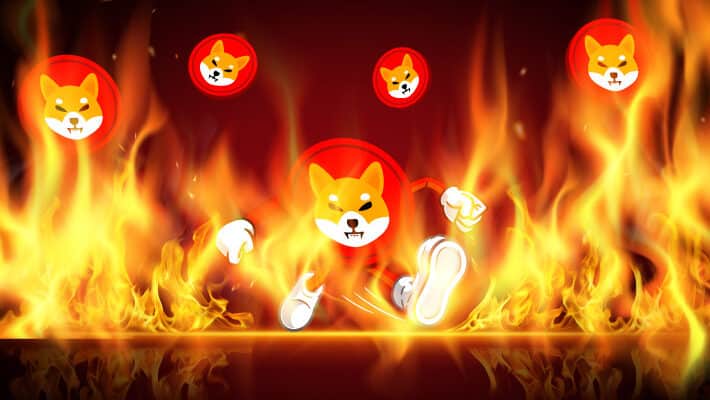 The spectacular growth of Shiba Inu in 2021 cannot be overstated as the coin’s popularity even surpassed that of Bitcoin, according to reports. The coin brought huge profits to the investors in mid-2021 which could have made millions out of a few dollars. The coin held strongly on the example set by Dogecoin and succeeded. But the celebration could not last long as the currency has to face a fall that has lasted for a few months now, except for a few insignificant hikes.

The coin’s predictions for 2022 seemed unimpressive, with no chances for the coin to reach 1 cent. The primary factor that hindered the development of the coin was its supply. Shiba Inu only has a finite supply, but that was enough to keep the coin from soaring any higher than its current value. The meme-coin community seems to have listened to the opinions of the experts as it has been burning some of SHIB’s supply for the last few months by moving them to a non-transferable wallet.

Earlier, Shiba Inu sent nearly 50% of the one quadrillion coins to Vitalik Buterin of Ethereum as a tribute. But, Buterin, uninterested in holding such a large supply, burnt nearly 90% of them, and 10% was donated for charitable activities in India. Experts believe that this action by Buterin has created a significant demand for the coin, which in turn gave it the push in the market. Now, the SHIB Army seems to have appropriated the same model and has been burning the coins in millions.

ShibBurn, a page dedicated to tracking SHIB coin burning, has reported that over 1 billion coins were removed from circulation in the last month alone. It excludes the 50 million coins removed from the chain in 24 hours. However, the total value of the coins in January was valued at only $29,000. SHIB currently trades at $0.00002154 as per the recent reports. You can get more details about the performance of Shiba Inu.

The reports from SHIBtyme states that a count of 339,025,547 SHIB tokens was incinerated in the last week of January. The count exceeds 3 billion SHIB when calculated from the 1st of December, 2021. Surprisingly, these counts do not even add up to nearly 1% of the total supply. Only 0.0005274% of the coins were removed in the last two months, with average daily incineration of 50 million SHIB tokens.

This project expects to burn 414 million. SHIB token in February. The Shibburn project earns profit through google ads and uses the revenue to purchase and burn SHIB coins. The expected revenue for February is $8 to $9k, which is enough to burn just over 400 million of the dog coins. Ethereum whales are also bullish about Shiba Inu’s metaverse opportunity.